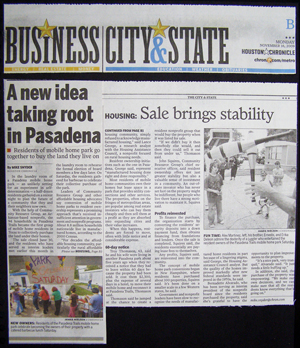 Deciding how to communicate a complicated story to the media takes thought, skill, and experience. Community Resource Group was throwing a Grand Opening Party in celebration of  its first conversion of a manufactured home park from investor-owned to resident-owned. But the event wasn’t the story. The story was about low-income, marginalized, but hard-working people striving for the American dream of home ownership and a better life for their family.

What could be more American than a group of people coming together to democratically form a nonprofit association, elect leadership, as a collective (think condominiums), buy their park, and then invest the income from the park back into the park.

The first thing the residents did was vote to install speed bumps. Imagine – this park had been around for at least twenty years with lots of children living in the park, and there were no speed bumps.